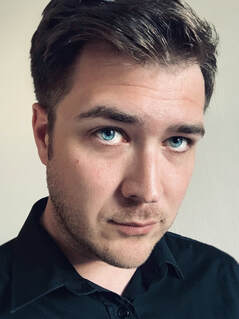 ​
​Originally from Ellon in Aberdeenshire, Colin first started singing and acting at Haddo House, being involved both on and off stage with the Children’s Theatre, Youth Theatre and the Choral and Operatic Society.

During his time at Gray’s School of Art, he continued his participation in many shows including Oklahoma (Jud) and Crazy For You (Director) with Treading The Boards, HMS Pinafore (Assistant Director), The Sorcerer (Director) and Yeomen of the Guard (Sgt Meryll) with the University of Aberdeen Gilbert and Sullivan Society, Invasion of the Doric Snatchers (Production Assistant) and Date Expectations in His Majesties Theatre for Aberdeen Student Charities, Hot Mikado (Pooh-Bah) with AVE Productions, Oklahoma (Curly) with Meldrum Musical Society, Zombie Prom (Joey), a 24 hour musical Anything Goes (Lord Evelyn Oakleigh) with Just Cause Theatre.

Colin sang with the National Youth Choir of Scotland (NYCoS) for 11 years, including tours to Sweden (2001), Chicago (2004), Hungary (2007) and Germany (2010). He also sang with the choir in London’s Albert Hall as part of the Proms season as well as several Last Night Proms in the Park concerts.

Colin has been a regular soloist in both concert and oratorio work having sang with numerous Choral Societies across the UK. He has been fortunate to sing as the bass soloist in performances of Handel’s Messiah, Bach’s St. John Passion, Rossini’s Petite Messe Solennelle, Goodall’s Eternal Light and Faure’s Requiem in some magnificent settings.

Since March 2019, Colin has been the Manager (previously Administrator) of NESMS.